The purpose of this article is to show you one way to get the most from your Traction Concepts Limited Slip Conversion Kit. This TC LSD Kit is not assembled for this post.

Example of the Traction Concepts LSD disc plate in contact with the raised lip on the axle gear.

If you have no idea how the little device can offer so much in the way of traction, there is more info on how it works here.

To get to the jest of this very important rule, or step that is often overlooked in our install guide,  you can see in the photo above, the Traction Concepts kit is not sitting flat on the axle gear shown.  The raised casting lip on the gear, is keeping the TC LSD kit from mating together; which is needed to engage either the lsd or locker function properly.  The TC LSD disc plates pivot when the LSD function engages. So if the TC plates are only riding on the raised lip of the gear, that is going to create a ring like groove instead of doing what it’s intended to do.

Now, take a look at the picture below. 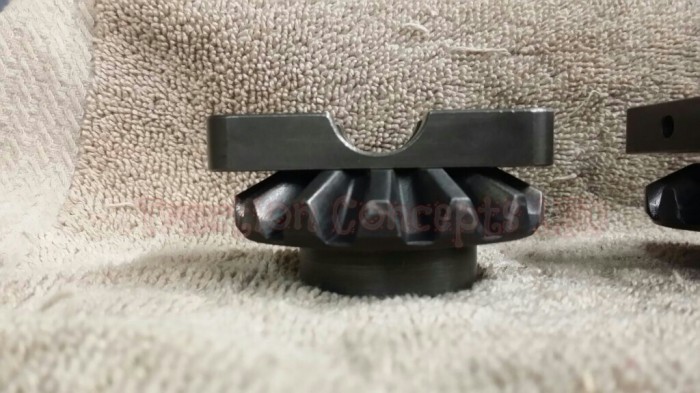 The raised casting lip has been machined down to the flat part of the gear. This has increased the contact surface area between the gear and the TC LSD Disc plate. Now there will be optimum performance gains with that lip out of the way of your new Traction Concepts LSD Kit.

Every kit includes either a typical installation guide. Our install guide shows you step by step, including pictures,  of the LSD Conversion Kit install into the diff and the basic tools needed for the job.   Whether you need to take off the lip like shown, or make room due to some clearance issues because the gear is a bit thicker, using a table sander can try your patience though we show this can be done with the budget, diy in mind. Having the gears machined flat on a lathe is the easiest route if you can do so.

Have a question? Reach out to Traction Concepts for more product info.

2 thoughts on “Proper Installation is Key”